Chinese team and equipment arrive in UK to support virus fight， fight the coronavirus together.

China sent an expert team and a large shipment of medical equipment to the United Kingdom on Saturday to help in the fight against COVID-19.

The team, sent from East China' Shandong province, comprises 15 experts and doctors who are specialists in disease control, traditional Chinese and Western medicine, psychology, nursing, and other fields.

In addition to conducting epidemiological investigation and epidemic prevention education in the UK, they will also participate in disease prevention and treatment work.

They brought with them up to 17.5 tons of medical supplies, including traditional Chinese medicine, personal protective equipment, epidemic prevention educational materials, and other equipment.

Liu Jiayi, Party chief of Shandong, went to the airport to see the team off and expressed thanks on behalf the provincial Party committee and the provincial government.

He said the team will introduce epidemic prevention and control knowledge and experience to people in the UK, especially Chinese overseas students, workers at Chinese-funded institutions and enterprises, and other overseas Chinese people.

During an online conversation with the British Chamber of Commerce in China on Tuesday, Liu Xiaoming, China's ambassador to the UK, said China encourages collaboration between business, research institutions, and colleges from both nations on vaccine and drug development to fight against the disease.

According to the latest UK government figures on Saturday, the number of people who died in the nation after being infected with the virus reached 1,019. 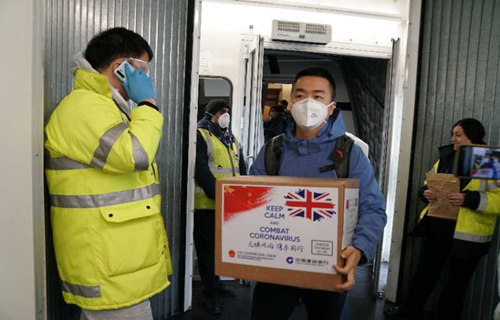